As we continue the blog series talking about Lenni-Lenape Native Americans, we will begin to discuss their society. The Lenni-Lenape had a great civilization and a very organized community.  Beginning with land, land could not be owned by a single person or family. Land was communal and people had some designated sections of the shared land.

Lenape created moderately sized villages on the land that they occupied. They villages were semi-permanent, as they would move around a little bit throughout the year. Villages were usually located close to river banks. In the villages the Lenni-Lenape would build their homes.

The Lenni-Lenape did not live in tee-pees as many people think they would have. Their homes were called wigwams and were a very impressive structure. Wigwams were made out of woven stalks of corn, large pieces of elm or bark. Mud and clay was also used in making wigwams which prevented water from leaking through. Platforms were built inside along the walls which served as seating, beds or tables. The space under the platforms was used as storage. Mats of animal skin and plants were used for flooring and bedding. 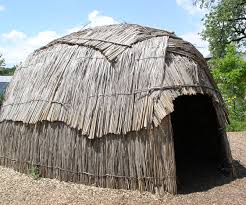