November marks National American Heritage Month which we should all use as a time to learn, reflect and celebrate the history and the heritage of Native Americans. To commemorate this month, we will be sharing several posts about Native American history, traditions and culture. Native American history does not come to the forefront of our conversations enough and we want to take this time to open up the dialogue.

The Lenni-Lenape were very peaceful people and had a very successful community before European colonists arrived on their land. The Lenni-Lenape lived in villages that were moderately sized. Typically, the villages were located on the banks and the rivers.

The Lenni-Lenape were very successfully farmers. New Jersey had, and still has, very fertile soil and ample water for farming. The Lenni-Lenape planted corn as their primary crop and also planted pumpkins, beans, squash and herbs. 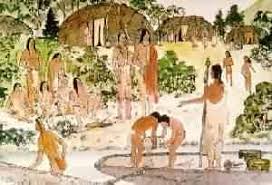